When deciding on the purchase of a land roller, there are many aspects to consider. Size, working width, transport style and cost all come into play. But when it comes to effectiveness, weight is king. 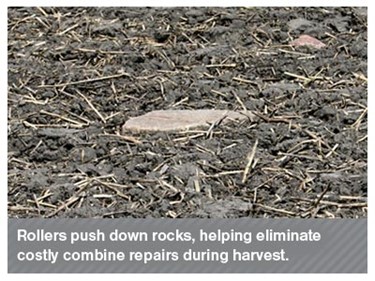 Simply put, a heavier land roller does a better, more consistent and more complete job than a lighter model. And when time and effort come into play, finishing a field incorrectly can cost more than just yields.

This is particularly true when facing difficult debris and residue situations, as well as short windows of time after planting beans. Smashing corn residue or pushing down large rocks requires serious muscle. And when inadequate rolling could lead to ingesting debris and thousands of dollars in damage to a combine’s threshing system and header, it’s best to be on the safe side.

Overall weight is a good thing. It’s a sign of quality and durability. So be wary of a lighter land roller that is the same length as another model. Chances are it was built with thinner or fewer metal parts.

The effectiveness of a given land roller starts with its overall weight, but this is only part of the equation. It takes pounds per foot to get the job done. The more it has, the higher a land roller’s effectiveness.

Researching a spec sheet may not be adequate, as some manufacturers fail to advertise such data. But figuring it out is easy enough: Divide the overall width of a land roller in its working position by the total weight. 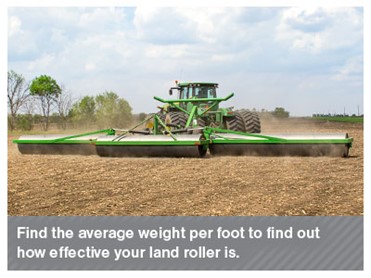 To put things in perspective, take a 40-foot land roller that weights 20,000 pounds. By dividing its weight by its width, we find the roller averages 500 pounds per foot. Now consider a comparable 40-foot land roller that weighs 15,000 pounds. It only averages 375 pounds per foot. Although it likely costs less than a heavier model, it won’t be nearly as effective when facing tough residue situations or large concentrations or rocks. It pays to find the average weight per foot to find out how effective one is compared to another.

Wait a minute: rolling with more weight is a good thing? But doesn’t that compact soil and, ultimately, hurt your bottom line?

There have been numerous studies on the effect of soil compaction on yields. Researchers estimate that yield losses can range from 5 percent to 10 percent, and as high as 55 percent. However, most of that compaction happens from heavy implements and heavily inflated tires. 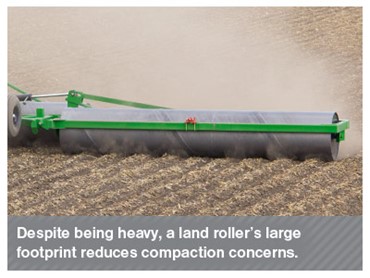 Jodie DeJong-Hughes is an extension educator with the University of Minnesota who has extensively studied the impact of compaction on soil and yields. Her rule of thumb to mitigate its yield-sapping impact is 10 tons per axle and 10 psi.

Consider that the average adult male exudes approximately 5 psi when he walks. A 44,000-pound, 84-foot land roller only puts a little more than 3 psi on the ground because of its large footprint. A farmer taking a stroll across his field to check on the crops actually exerts more psi than a land roller 200 times heaver.

With volatile commodity prices and higher input costs, farmers need to consider many variables to come out ahead. Making educated purchases on new equipment can definitely help in that respect.

Land rolling, aside from safety and efficiency benefits of having a flat field during harvest, improves seed-to-soil contact and boosts yields. Studies have shown that rolled bean fields average an additional 1 to 3 bushels per acre compared to non-rolled fields. Using a heavier roller assures not only a flatter and more consistent field, but that every seed has the optimum amount of soil contact.

To get the most productive roller for your money, be sure to weigh all the factors – including pounds. In the case of land rollers, it pays to roll bigger.