Summers | An Iron Defense Against Disease

An Iron Defense Against Disease 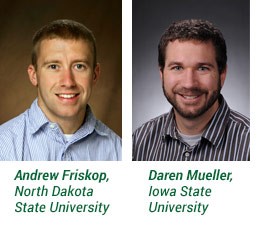 Between the crazy weather, too much rain (or a lack thereof) and withering commodity prices, farmers across North America have plenty to worry about. Tack on the possibility of a yield-sapping disease, and it’s no wonder collective blood pressures rise whenever someone utters “tan spot” or “white mold.”

Luckily, modern farmers have plenty of weapons available to combat just about any crop scourge, whether in the form of crop rotations or chemical applications. But after the fall harvest, there’s one more option that could help stifle an outbreak the following season: fall tillage.

“Tillage is just one of the cornerstones of disease management,” said Andrew Friskop, an assistant professor and cereal extension pathologist at North Dakota State University (NDSU). “In the Red River Valley, for instance, a majority of our most prevalent diseases are residue born. So any time you have more residue on the surface, you have the potential for more spores.”

By tilling the residue of certain disease-laden crops in the fall, the pathogens lose the nutrients they need to survive and thrive on next year’s crop where they could potentially spread and infect more plants. Friskop noted that studies have shown the deeper residue is buried, the less chance these pathogens have of surviving until spring.

“Anytime you can incorporate diseased plant residue into the soil, you break down the food source those pathogens need to survive,” he said.

Friskop noted that common North Dakota diseases that can be mitigated and even eliminated by utilizing fall tillage include tan spot, a wheat disease, and Septoria, which infects soybeans. For corn, tillage has been shown to help against certain seedling diseases and ear rots, and reduce the severity of some leaf diseases.

Fall tillage is typically more effective than spring tillage because the residue is buried for a longer duration before planting. Pathogen survival is usually shortest if residue is completely buried. However, studies have shown that even partially burying by chopping, disking or chiseling is beneficial, too.

“A study in Illinois comes to mind where researchers were looking at burying corn residue,” Friskop said. “The most invasive means resulted in little to no disease survival, the less invasive had more disease present but at a manageable level, and no-till resulted in the greatest disease survival.”

But What About No-Till?

However, in certain areas where no-till or minimal till is required, either because of government environmental mandates or other factors, fall tillage may not be an option.

“There are a lot of no-till acres in Iowa, and fewer tillage acres than the historical norm,” said Daren Mueller, assistant professor and plant pathologist at Iowa State University. “And the soybean diseases that are around here aren’t impacted by tillage.” Although tillage can reduce the risk of certain diseases, lowering disease risk should be weighed against factors such as soil conservation, soil moisture needs and production cost control. In many cases, there are other tactics that can be used to manage residue-born diseases alongside conservation tillage practices.

If a disease hits a farmer’s crop, the knee-jerk result of tilling it in the fall may not be the best answer. In 2010, for instance, Iowa experienced a significant soybean outbreak of sudden death syndrome, the No. 2 disease in the state. The disease is worse in compacted soil, so farmers reacted by tilling in force.

“We implemented a study immediately, and for the past six years there has been absolutely no difference between tillage and non-tillage on the impact to SDS,” Mueller said.

Right Tool for the Job

If a disease attacks this year’s crop, it pays for a farmer to do some homework and then decide if fall tillage is a worthwhile weapon to fight it. 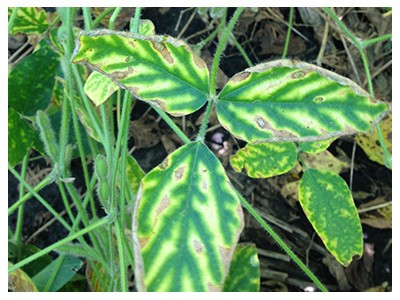 White mold is an example of a disease that isn’t affected by tillage. This nasty fungus attacks soybeans and produces black bodies that can survive for years underground. If buried after infesting a crop, it will simply lay dormant until tilling brings it back to the surface. If the conditions are right and a broadleaf crop like sunflowers is planted, a farmer who thought he was rid of white mold years ago could suddenly be faced with it again.

In such cases, NDSU’s Friskop suggests a multi-pronged approach. Leaving the white mold on the surface and seeding over it with wheat will give the spores nothing to attach to. In fact, a crop rotation of 2-3 years between soybeans, interlaced with corn or small grains, is a sound way to combat white mold. In conjunction with soybean varieties bred for white mold resistance, as well as applicable fungicide, farmers can fight the disease.

On the other hand, certain diseases like tan spot are devastated by successful and aggressive fall tillage. Where small grains are the primary crop, and where farmers largely practice no-till or minimal tillage, tan spot can gain a strong foothold.

“Tan spots are particularly common in western North Dakota where we have a lot of no-till, wheat-on-wheat acres,” Friskop noted.

Tilling tan-spot riddled residue in the fall can snuff out the infestation by spring planting. Plus, farmers can avoid the extra time and cost of a fungicidal application, which may need to be applied more than once if the disease isn’t controlled the first time. At the very least, Friskop advises minimal tillage and crop rotation away from small grains anywhere tan spots have taken hold.

The bottom line is that farmers have a lot to worry about, and a disease threat is certainly serious. But by using smart farming practices and any weapons at their disposal – including fall tillage, when applicable – farmers have a chance at decreasing those diseases for the following year.

“The big message with tillage and plant disease management is just to remember that there are other tools out there to help the process,” Friskop said. “By no means if you conventional till and put everything in the ground will you be disease free. But it is an option in certain situations that can definitely help, depending on the crop, the conditions and the disease.”