Summers | An In-Depth Look at the Diamond Disk

The Diamond Disk was developed in 1984 by Ardon Herman, a farmer and inventor from Brinsmade, North Dakota. Summers had been working with Ardon since the early 1970s on a variety of projects, with the most commercially successful being the Herman Culti-Harrow. 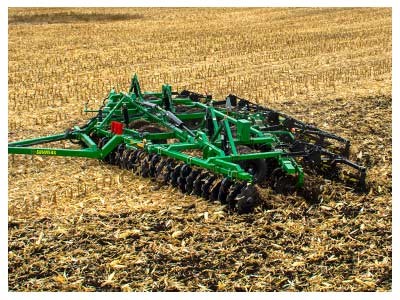 Ardon’s farm is in a productive area of central North Dakota. However, in addition to surface stones, there are also many large buried rocks. Conventional X-frame disks have a high concentration of weight in the center, so Ardon was experiencing blade breakage in this location. Another issue is that X-frame disks rely on the rear tractor tires to provide blade depth control. Ardon’s fields have a variety of rolling hills and tilled waterways, which require more precise depth control than what he was getting with his X-Frame disk. Ardon wanted to solve both of these problems, so he designed the floating hitch Diamond Disk, which follows the ground contour and, when a rock is contacted, the weights of the front gang and rear gang are lifted independently.

I started working with the Diamond Disk in 1985. I purchased one of the first prototypes for my farm and have always been impressed by the versatility, durability and field finish left by the Diamond Disk. Fast-forward to 2009, and the Upper Midwest had been in an unusually wet cycle since the mid 1990s. In most years this meant good crops, but increasing amounts of residue and wet post-harvest conditions became challenging for the Diamond Disk. While it was still an extremely useful tool, the window of opportunity for tillage was limited by moisture conditions. I tried several versions of blade scrapers, each working well in certain conditions, but not in all conditions. Believe me, I know how frustrating it is to feel the tractor pull down, knowing that one or more disk gangs have stopped turning and is pushing a large pile of soil and residue.

Two of the most successful products currently built by Summers are the Supercoulter and Diamond Disk. The Supercoulter is meant for residue management and vertical tillage, while the Diamond Disk excels in primary tillage applications. Comparing the two, I knew that it is nearly impossible to plug the gangs on a Supercoulter. My idea for the DT Series was to build a machine with the best features of both the original Diamond Disk and Supercoulter. To provide a smooth soil profile at the center line of the Diamond Disk, we had been using two low-concavity, notched blades on the rear center for many years. I thought it was worth building a prototype with this same blade across the entire machine. 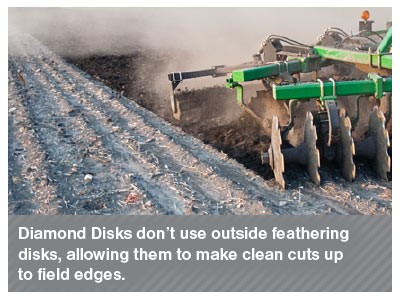 Did it work? Absolutely. The low-concavity notched blades of the DT have worked above and beyond my expectations. Nothing I did with the scraper design matched the ability to go through high residue and wet conditions like the DT.

Other farmers have also been very impressed with the ability of the DT to work through wet areas — particularly the second pass. After wet soil has been turned once, there often is not enough firm soil to drive disk gangs, and once a gang stops turning the machine will plug. Disk owners often work the ground once, then wait for hours, if not days, to let it dry before going back to make a second pass. The DT lets you complete both passes at the same time with minimal plugging. 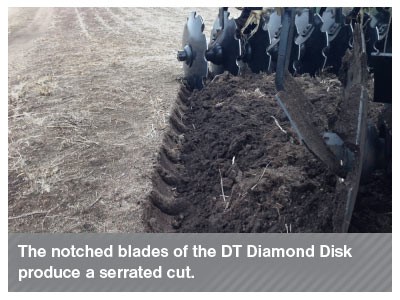 A smoother field finish in sod and CRP ground is another benefit. The notched blades produce a serrated cut, providing a tear point in the heavy strips of sod coming off the blades. Instead of dealing with huge slabs, you have smaller, more manageable pieces for a smoother, more level field finish. The tractor operator on the next pass over the field is very appreciative of this feature!

Myself and another Summers engineer now own DT Diamond Disks for our own farms.

How a Diamond Disk works: